There is a layer of hard and brittle α layer on the surface of forging (rolling) rod of titanium alloy. Before die forging, the layer should be removed to avoid cracking of blank surface during forging. For bars with a diameter less than 50 mm, the surface layer with a thickness of 3 mm shall be removed, and when the diameter is greater than 50 mm, 5 mm shall be removed. For extruded bars, 2mm can be removed if the diameter is less than 50mm, and 3mm can be removed for those with diameter greater than 50mm. After turning, if some parts still have defects, local grinding can be carried out to eliminate them, and the grinding depth should not be greater than 0.5mm.
Fixed size titanium alloy blanks for forging can be cut by sawing machine, lathe, anode cutting machine, punching shear machine, grinding wheel cutting machine or forging hammer or hydraulic press. The hot cutting efficiency is the highest on the punching and shearing machine.

Titanium and titanium alloys are widely used in various fields because of their low density, high specific strength and good corrosion resistance. In order to better use these materials, researchers have done a lot of research on the forging process.

Free forging is usually carried out between two flat dies or dies without die cavity. The tool used in free forging has the advantages of simple shape, high flexibility, short manufacturing cycle and low cost. However, the labor intensity is high, the operation is difficult, the productivity is low, the quality of forgings is not high, and the machining allowance is large. Therefore, it can only be used when there are no special requirements for the performance of parts and the number of pieces is small. 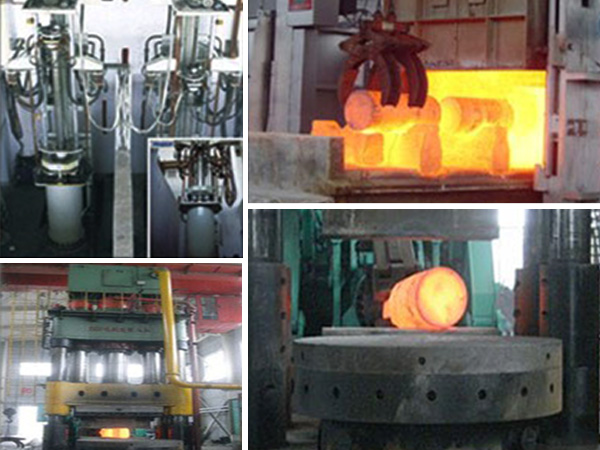 The blank is deformed between two modules with cavity, and the forging is confined in the cavity. The surplus metal flows out from the narrow gap between the two dies, forming burr around the forging. The metal is forced to press into the shape of the die cavity under the action of the resistance of the die and the surrounding burr. In the process of closed die forging, there is no transverse burr which is perpendicular to the moving direction of the die. The cavity of closed forging die has two functions: one is to form the blank, the other is to guide. It is carried out on a multi direction die forging machine. In addition to the vertical punching plug, the multi-directional die forging machine also has two horizontal pistons. Its ejector can also be used for punching. The pressure of the ejector is higher than that of the ordinary hydraulic press. In multi direction die forging, the slide block acts on the workpiece alternately from the vertical and horizontal directions, and one or more piercing punches are used to make the metal flow outward from the center of the die cavity to achieve the purpose of filling the die cavity. There is no burr of special forging on parting line of barrel part.

In order to forge large integral forgings on existing hydraulic pressure, sectional die forging and backing plate die forging can be used. The feature of the method is to process the forging piece by section, one part at a time, so the required equipment tonnage can be very small. Generally speaking, this method can be used to process large forgings on medium-sized hydraulic press.

Titanium alloy is widely used in aircraft and aircraft engine as an important metal structure material because of its high specific strength, good medium temperature performance, corrosion resistance and good welding performance. According to statistics, the weight ratio of titanium alloy used in foreign aircraft has reached about 30%, which shows that the application of titanium alloy in aviation industry has a broad future.
However, titanium alloy also has some shortcomings, such as high deformation resistance, poor thermal conductivity, high notch sensitivity (about 1.5), and the change of microstructure has a significant impact on mechanical properties, which leads to the complexity in smelting, forging and heat treatment, and easy to appear defects in titanium alloy forgings.

There are inclusions on the surface of the blank, and cracks are often formed along the inclusions during forging, or obvious foreign bodies appear after forging corrosion, most of which are high melting point and high density metal inclusions. The high melting point and high density elements in titanium alloy composition are not fully melted and left in the matrix (such as molybdenum inclusion), carbide tool chips mixed with smelting raw materials (especially recycled materials) or improper electrode welding process (titanium alloy smelting generally adopts vacuum consumable electrode remelting method), such as high-density inclusions left by tungsten arc welding [III], Such as tungsten inclusions, in addition to titanium inclusions, such as titanium alloy forgings with inclusions are not allowed to be put into use.

The results show that the low cycle fatigue crack growth rate will be accelerated and the fatigue failure will be advanced.

It mainly refers to forging cracks. Titanium alloy has high viscosity, poor fluidity, and poor thermal conductivity. Therefore, in the process of forging deformation, due to large surface friction, obvious internal deformation heterogeneity and large temperature difference between inside and outside, it is easy to produce shear band (strain line) in the forging, and crack along the direction of maximum deformation stress in severe cases.

The thermal conductivity of titanium alloy is poor. In addition to improper heating which causes overheating of forgings or raw materials, it is also easy to cause overheating due to thermal effect during deformation in the forging process, resulting in microstructure changes and overheating widmanstatten structure.
In order to ensure the quality of titanium alloy forgings, in addition to strictly controlling the quality of raw materials, we should also pay attention to the ultrasonic flaw detection of the blank and semi-finished products of the forgings, so as to prevent some defects that may change deformation and physical properties in the subsequent heating process.
Source:  China Titanium Alloy Flange Manufacurer: www.titaniuminfogroup.com