What are details of ASME B16.11 threaded fittings?

Threaded joints probably represent the oldest method of joining piping systems. Like Socket Weld fittings, threaded fittings are mainly used for small pipe diameters (Small Bore Piping); generally for piping whose nominal diameter is NPS 2 or smaller.
The dimensional standards for taper pipe threads are given in ASME B1.20.1. That document gives all required dimensions including number of threads per inch, pitch diameter, and normal engagement lengths for all pipe diameters.

All fittings on this page are described, are provided with NPT thread, ASME B1.20.1. The American National Pipe Thread Tapered, is the best known and most widely used connection where the pipe thread provides both the mechanical joint and the hydraulic seal. NPT has a tapered male and female thread which seals with Teflon® tape or jointing compound.

TYPES OF THREADED FITTINGS BY CLASS AND SIZE

Plugs and Bushings are not identified. They may be used up through Class 6000 ELBOW 90°
This Elbows make 90° changes of direction in the run of pipe. TEE
This Tee makes 90° branch from the main run of pipe. CROSS
Crosses makes 90° branch from the main run of pipe. 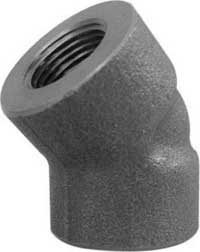 ELBOW 45°
This Elbows make 45° changes of direction in the run of pipe.

FULL-COUPLING
A Full Coupling, joins pipe two pipe or to a nipple etc… HALF-COUPLING
The Half Coupling can be directly welded to the run pipe, to make a branch connection. 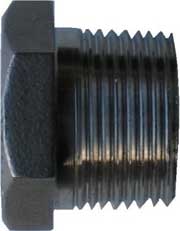 ROUND HEAD PLUG
Seals the threaded end of fitting. HEX HEAD BUSHING
Can be used to reduce a threaded fitting. UNION (MSS SP-83)
Unions are primarily used for maintenance and installation purposes. It is a screwed joint design and it consists of three interconnected pieces. Two internally threads and a centerpiece that draws the ends together when rotated.

Advantages and Disadvantages of Threaded Fittings

NEXT： What are details of ASME B16.11 socket weld fittings?